What are the gastrointestinal adverse effects of the glucagon-like peptide 1 receptor agonists, and how should they be managed?

The GLP-1 RA are incretin mimetics that bind to glucagon-like peptide 1 (GLP-1) receptors, thereby exerting the following pharmacological effects: increase glucose-dependent insulin secretion, inhibit glucagon secretion, slow gastric emptying, and promote satiety.2,12 GLP-1 RA are divided into short-acting (e.g., exenatide twice daily, lixisenatide) and long-acting agents (e.g., dulaglutide, liraglutide, semaglutide, exenatide extended-release [ER]).2-9 Table 1 provides the dosing and pharmacokinetic properties of the GLP-1 RA.3-9,13 Of note, most of the agents require dosage up-titration to lessen GI intolerance, and both semaglutide formulations (tablet and injection) and liraglutide have non-therapeutic starting doses for initial titration to reduce GI adverse effects.3-10,14 Exenatide ER is formulated as microspheres suspended in a medium-chain triglycerides oil, which leads to a gradual release of exenatide, and therefore, does not require a dose titration due to a slow rise to steady-state concentrations.9,13 At recommended doses, short-acting GLP-1 RA lead to intermittent drug exposure, while long-acting GLP-1 RA result in more steady drug exposure.13,15 Over time, continuous exposure with the long-acting GLP-1 RA leads to a reduced effect on slowing gastric emptying due to tachyphylaxis, which has not been observed with the short-acting agents because of their pharmacokinetic profiles. Long-acting GLP-1 RA have lower rates of GI adverse effects (especially nausea) due to their lesser effect on gastric emptying compared to short-acting GLP-1 RA.2,12,13,15,16 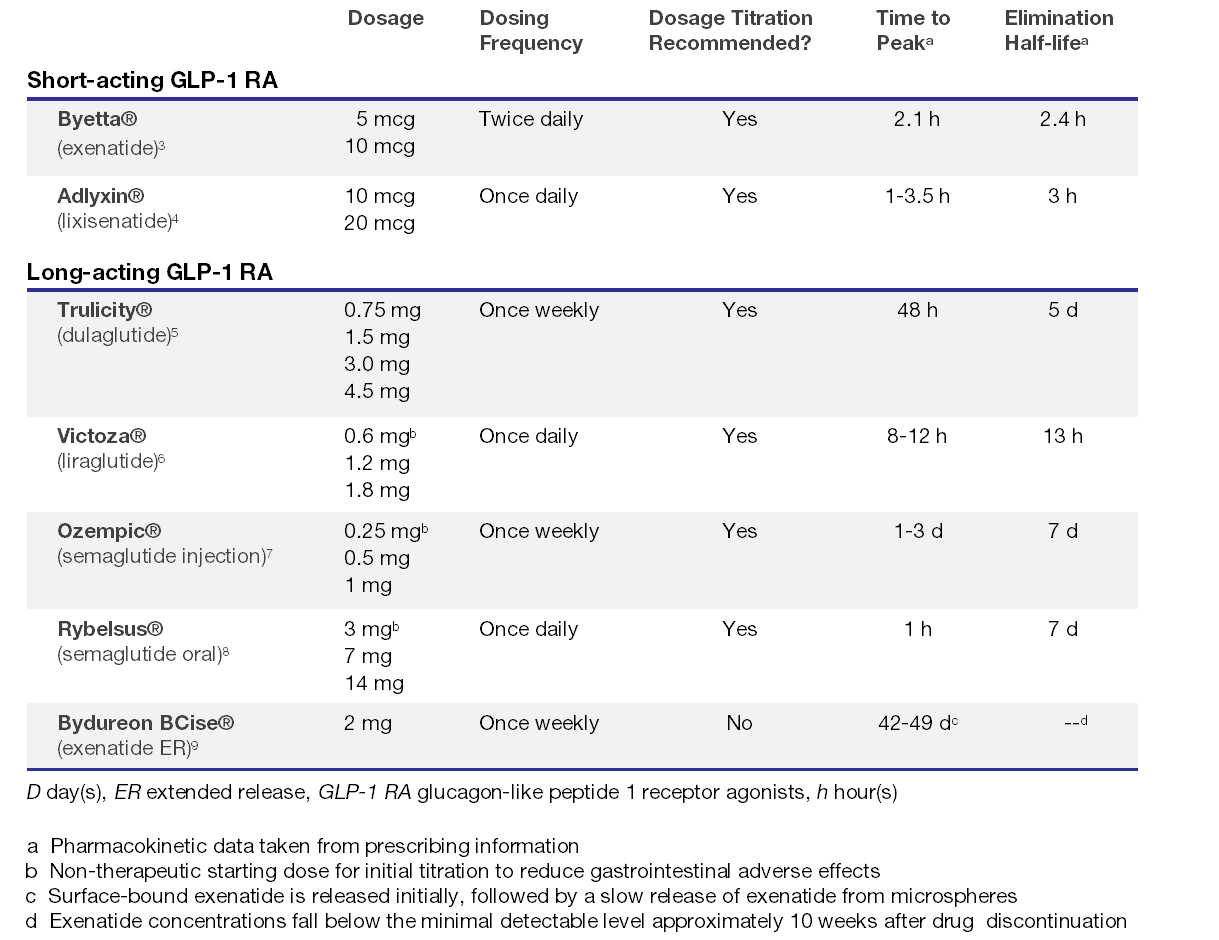 Among the short-acting GLP-1 RA, a meta-analysis by Bettge and colleagues found that lixisenatide was associated with a lower risk of nausea (p = 0.0038) and diarrhea (p = 0.0018) but found no difference in risk of vomiting (p = 0.42) compared to exenatide twice daily.15

When comparing long-acting GLP-1 RA, exenatide ER appears to have a favorable GI safety and tolerability profile compared to some long-acting agents due to a lower risk of nausea and vomiting.16,17 A meta-analysis by Htike and colleagues found that exenatide ER was associated with a lower odds of nausea and vomiting compared to liraglutide and dulaglutide.16 Additionally, Bettge and colleagues found a significantly lower risk of nausea with exenatide ER than liraglutide (p < 0.0001).15 A meta-analysis including data with injectable semaglutide found that subcutaneous semaglutide was associated with higher incidences of nausea (odds ratio [OR], 1.72; 95% CI, 1.38 to 2.14) and vomiting (OR, 1.52; 95% CI, 1.12 to 2.07), but not diarrhea (OR, 1.24; 95% CI, 0.96 to 1.61), compared to other long-acting agents (liraglutide, exenatide ER, and dulaglutide).18 Additionally, a meta-analysis of the PIONEER trials found that oral semaglutide was associated with an increased risk of vomiting compared to other GLP-1 RA (liraglutide and dulaglutide) (relative risk [RR], 1.96; 95% CI, 1.06 to 3.64), but no difference in risk of nausea and diarrhea.19 Compared to liraglutide, dulaglutide has shown similar risks of nausea and vomiting; however, Bettge and colleagues found a lower risk of diarrhea with dulaglutide.15,16

There can be an increase in reported GI adverse effects when GLP-1 RA are used concurrently with background antihyperglycemic therapies such as metformin or insulin due to similar GI adverse effect profiles (metformin) and possibly a more advanced stage of diabetes (use of insulin).13,15 The meta-analysis by Bettge and colleagues found that background metformin increased the risk of nausea (p = 0.04) and vomiting (p = 0.0009) for all GLP-1 RA, and background insulin increased the risk of nausea (p = 0.0009).15 These findings were mainly driven by the short-acting GLP-1 RA; in particular, exenatide twice daily was associated with significantly higher rates of nausea (p < 0.0001), vomiting (p = 0.0026) and diarrhea (p = 0.0005) with background insulin, and nausea (p = 0.0005) and diarrhea (p = 0.0038) with concurrent metformin.

Table 2. Incidence rates of nausea, vomiting, and diarrhea reported in the prescribing information for the GLP-1 RA.3-9 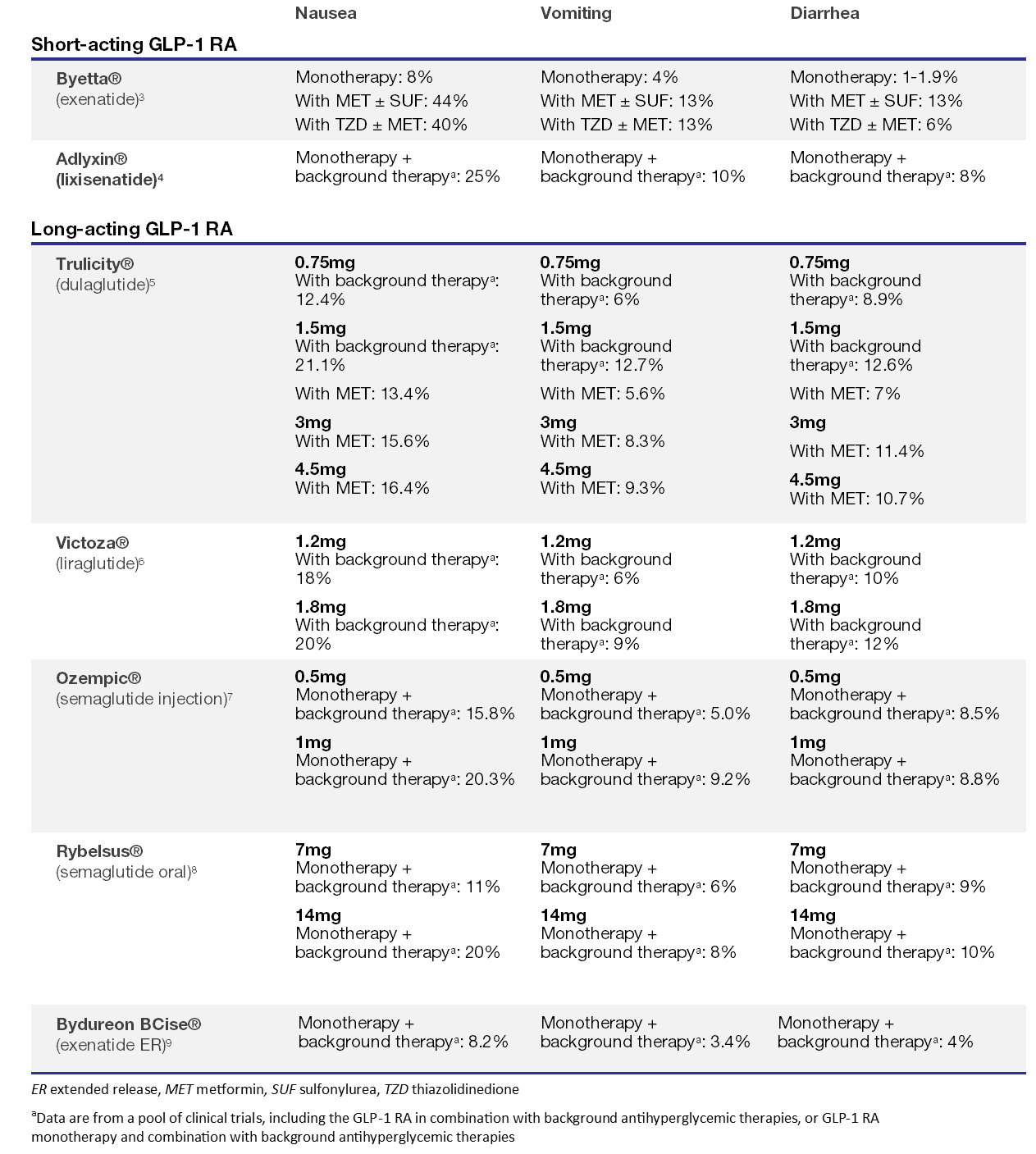 Patients with gastroparesis and severe gastroesophageal reflux disease should be carefully monitored while taking GLP-1 RA due to the potential for slowed gastric emptying.2,17,22 The prescribing information for exenatide twice daily, lixisenatide, dulaglutide, and exenatide ER include a warning to avoid use in patients with severe GI disease (e.g., severe gastroparesis).3-5,9 Patients should also be aware of the potential risk for pancreatitis and the associated signs and symptoms.3-9 A classic symptom is constant, intense abdominal pain that may penetrate to the back and can occur with vomiting. Patients should be advised to discontinue the GLP-1 RA if this hallmark symptom arises.

In summary, nausea, vomiting, and diarrhea are the main GI adverse effects of GLP-1 RA, with varying rates among agents and doses. Therefore, dose titration and patient counseling are essential for mitigating these GI disturbances.

The information presented is current as of December 2021. This information is intended as an educational piece and should not be used as the sole source for clinical decision making.